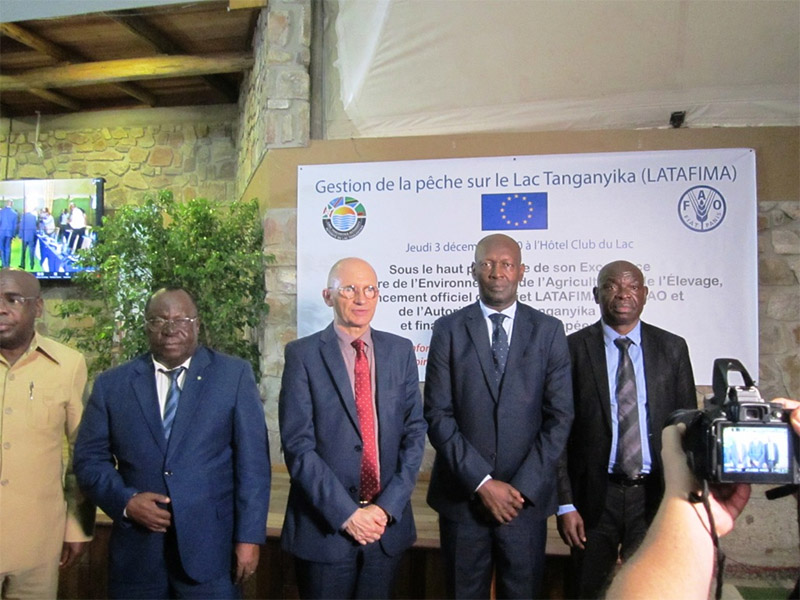 This is official. The Lake Tanganyika Authority has launched the Lake Tanganyika Fisheries Management project, LATAFIMA. It was on this Thursday, December 3, 2020, at the Tanganyika Lake Hotel. The LATAFIMA project is funded by the European Union for the amount of 2 million Euros. The implementation was entrusted to FAO, the United Nations Food and Agriculture Organization, for a project duration of 3 years. With this project, approximately 10,000 direct beneficiaries will be supported from the four countries bordering Lake Tanganyika, namely the Republic of Burundi, the Democratic Republic of  Congo, the United Republic of Tanzania, and the Republic of Zambia.

The fight against illegal, unregulated and unreported fishing in Lake Tanganyika, including the capture of immature fish, fishing in regulated areas, and the use of illegal gear will be targeted by the project. The activities of the project were launched by the Permanent Secretary of the Ministry of Environment, Agriculture, and Livestock with the presence of the European Union Ambassador.

“Through this project, the Tanganyika Lake Authority aims to turn fishing into a sector driven by dynamic public and private actors capable of creating jobs, increase production and productivity through sustainable exploitation of Fisheries Resources to reduce poverty, ensure food and nutrition security and access to basic social services», said the Executive Director of the Tanganyika Lake Authority, Mr. TUSANGA MUKANGA Sylvain.

For his part, Mr. Isias ANGWE OBAMA, FAO Resident Representative in Burundi, said that “Open access to the lake, high pressure on the lake due to a very high number of fishermen, the use of prohibited gear and illegal fishing practices are all factors that are responsible for the decline in productivity of Lake Tanganyika. The implementation of this project will contribute to the reduction and mitigation of the many threats to the lake. This project will contribute to ensure the achievement of FAO strategic objective 2, namely to make agriculture, more productive and sustainable forestry and fishing.” The ceremonies ended with the signing of the Memorandum of Understanding between the FAO and the Lake Tanganyika Authority.