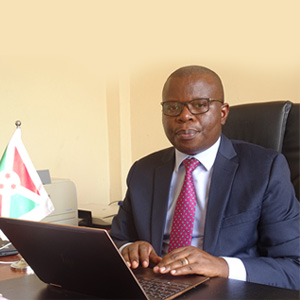 Capt. Dieudonné DUKUNDANE who joined Lake Tanganyika Authority since April 20th, 2022; graduated successfully from the Antwerp Maritime Academy of Belgium and from the University of Burundi in the Faculty of Economic Sciences. Later, he had the privilege to attend many professional and practical trainings in East Africa, Belgium, China and Singapore in matters related to Water Management, Maritime Transport & Port Logistics. Later, he joined Salford University in collaboration with the Robert Kenedy College for a Masters in Project Management since 2021.

With a wide range of 15 years’ extensive experience in working with International & National Entities in Eastern and Central African Countries, Capt. Dieudonné DUKUNDANE’s performance has been on the rise as witnessed by two (2) Presidential Awards (July 2018 & May 2022); A Continental Award (March 2022); An Honorific Title as ‘’Ambassador’’ in April 2022 and Many other Resolutions recognizing his contribution in advancing Trade and Regional Integration Agendas.  This has been channeled through key intervention areas of Strategic Planning & Fundraising, Project Management; Trade Logistics and Management of Multimodal Transport networks. His contribution towards the recently shaped Lake Tanganyika Integrated Transport Program has been a transformative move in unlocking the Trade Potential that Lake Tanganyika offers.

For Capt. Dieudonné DUKUNDANE: My Mission is to optimally engage for an Environment that drives Sustainable Investments and Trade in order to impulse and enhance Inclusive Economic Development within Lake Tanganyika Region.